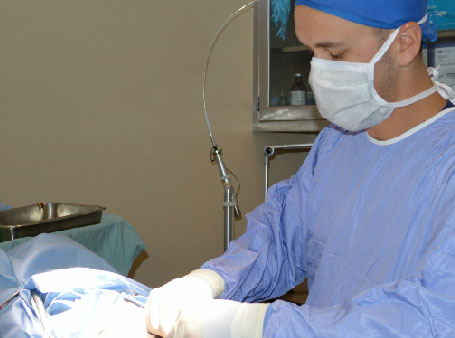 About Laser and Laparoscopic Surgery

All of our routine surgical procedures are performed using our CO2 laser in lieu of a scalpel blades. The laser does not crush, tear, or bruise as it cuts, instead sealing tissues as it cuts which results in less pain for your pet. The minimal cost along with the great benefits deems any other type of cutting technique outdated.

What are the Benefits of the CO2 Laser?

As the laser cuts it seals small blood vessels. This drastic reduction in bleeding enables a number of new surgical procedures that are not practical with a conventional scalpel.

The CO2 laser beam efficiently kills bacteria in its path, producing a sterilizing effect that reduces the chance of infection.

Laparoscopy combined with Laser Surgery provides the best surgical experience for your dog or cat. Laparoscopy is a minimally invasive way to perform procedures within the abdomen and to provide an extensive window to the organs for a well-rounded internal examination. At PCAC, our surgeons operate using a camera and tools inserted through one dime-sized incision, leaving a very small area for healing.

What are the Benefits of Laparoscopy?

By using the laparoscope, our surgeons able to use a much finer and more precise technique which results to less bleeding and tissue trauma, and much less pain! Studies have shown up to a 67% reduction in pain for pets who were spayed with laparoscopy versus traditional techniques. Anesthesia time can also be reduced which is important in geriatric and debilitated patients.

What Procedures Can it be Used For?

This technique was originally used as a diagnostic tool for viewing the internal contents of the abdomen and obtaining tissue samples, but has progressed to many other surgical procedures.

Commonly performed to rule out disease or cancer.

A fast and simple technique performed almost daily at PCAC. Rather than making a larger incision, the surgeon is able to make a small incision and perform the majority of the procedure internally allowing him to closely monitor the area for excess bleeding and be dealt with immediately. It also gives an excellent view of the internal organs. Upon going home, you will receive a detailed report of your pet’s laparoscopic spay with images that were taken during the procedure.

Occurs when one or both of the testicles has not descended from the abdomen. Although not all cryptorchid neuters require making an abdominal incision, when they do, using the laparoscope allows the surgeon better visualization of the abdomen. This makes the discovery of the undescended testicle quicker, easier, and less invasively.

Gastropexy is a surgery to prevent GDV, or bloat (stomach twisting) which is an often fatal condition that may occur in large breed dogs. Gastropexy involves tacking the stomach to the abdominal wall so that such twisting cannot occur. This procedure is often added on at the time of the dog spay or neuter.

What Are The Benefits of Gastropexy?

Gastropexy will not prevent a dog from “bloating”, which, although the true cause is unknown, seem to occur when there is too much activity too soon after eating, stress, eating or drinking too quickly, and trauma. However, if a dog does bloat, the gastropexy will prevent the stomach from twisting. While bloat, if treated quickly, has a good prognosis for recovery, if the stomach has twisted, even with emergency surgery, often has a poor prognosis.

Traditional gastropexy surgery involved a huge incision and was very painful. At PCAC, we do gastropexies only by laparoscopy because of the great reduction in pain it provides.

What Breeds Are Prone To Bloat?

Any dog with a deep chest is particularly prone to bloat. Although it can happen to any dog, if you have any of these dog breeds you should consider having a gastropexy performed on your pet either at the spay/neuter or at any time afterwards. Symptoms of bloat/GDV include distended abdomen, attempts to belch or vomit, pale gums, hypersalivation, shortness of breath, cold body temperature, weakness, and collapse.